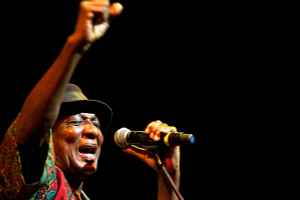 Born in 1936, Ebo Taylor has been a vital figure on the Ghanaian music scene for over six decades. In the late '50s he was active in the influential highlife bands the Stargazers and the Broadway Dance Band. In 1962, Taylor took his own group, the Black Star Highlife Band, to London, which led to collaborations with Nigerian afrobeat star Fela Kuti as well as other African musicians in Britain at the time. Returning to Ghana, he worked as a producer, crafting recordings for Pat Thomas, C.K. Mann, and others, as well as exploring his own projects, combining traditional Ghanaian material with afrobeat, jazz, and funk rhythms to create his own recognizable sound in the '70s.