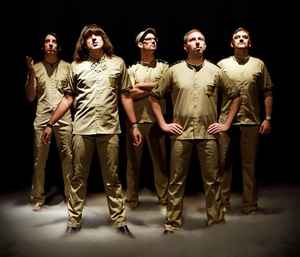 Real Name:
Rolf Keller, Gerry Germann, Mario Janser, Robert Ebler, Stefan Saurer
Profile:
Men from S.P.E.C.T.R.E. distillate mod sound to the clubs since 1997. The mix of soundtracks of rocker attacks, the club scene, and end time visions build up the sound of this band. Blow out your speakers with Hammond organ and fuzzed + phased guitars, while drums, bass and percussion mash up the background.

"The Living Eye" is the third record of the S.P.E.C.T.R.E.’s, and released in November ‘06 on the American label "Hammondbeat Records". Previously the albums "With the finger on the trigger" [1998] and "Sugartown" [2002] were published on the Swiss cult label "Sheep Records". Some tracks were already released on compilations on different international labels like Acid Jazz Records (UK), Hammondbeat (USA), Vitaminic (ITALY), BipBip (SPAIN). The track "Purple Pill People" from the CD "The Living Eye" will be released on Acid Jazz Records (UK) as well.

Men from S.P.E.C.T.R.E. have toured in Italy, Spain, UK, Germany, Belgium, France and in Switzerland. The Swiss quintet will be on stage with their new material... heading for lots of trouble.