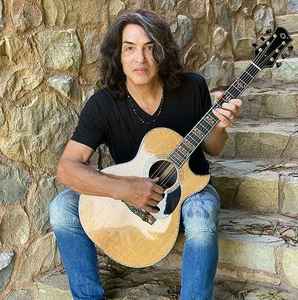 Paul Stanley is an American hard rock guitarist, singer, musician, painter and songwriter best known for being the rhythm guitarist and primary lead vocalist of the rock band Kiss. He is the writer or co-writer of many of the band's highest-charting hits.

Before Kiss, Paul Stanley was in a local band, Rainbow (not to be confused with Ritchie Blackmore's Rainbow) and was also a member of Uncle Joe and Post War Baby Boom (with bassist Billy Troiani). Through a mutual friend of Gene Simmons', Stanley joined Simmons' band Wicked Lester (2) in the early 1970s. The band recorded an album in 1972, but as of 2010 it has not been officially released (although songs from the album appeared on Kiss's 2001 box set). Wicked Lester soon fell apart and Stanley and Simmons placed ads for a drummer and a guitarist in various New York papers. This resulted in Peter Criss and Ace Frehley joining the group, and they named themselves Kiss. Kiss released their self-titled debut in February 1974.

Stanley's persona in Kiss was "The Starchild" utilizing one star over his right eye. For a brief time, Stanley changed his make-up character to "The Bandit", with a "Lone Ranger" style mask design make-up pattern. This make-up design would only be used during a few mid-1973 shows, soon to be replaced by the now famous "The Starchild" make-up design and persona. In his book Sex Money Kiss, Gene Simmons admits that Stanley was the driving force for Kiss during the makeup-free 1980s, while Simmons was feeling lost without his demon makeup and was distanced from the band while attempting to launch a film career.

In 1999, Stanley starred in a Toronto production of The Phantom of the Opera, in which he played the role of The Phantom. He appeared in the musical from May 25 to August 1, and again that year from September 30 to October 31, 1999.

Stanley made his debut as a painter in 2005, exhibiting and selling original works of art.

Stanley collaborated with Boston-based power pop group Click Five on their hit single, "Angel To You (Devil To Me)"

November 6, 2022
i would like to see a list of paul stanley songs he wrote for other people including craig mclachan and bad candy.

December 23, 2017
I watched the 13 videos of Paul Stanley that you have listed. The quality of sound is Good. They were a little disappointing though because the videos are stills. Other than that because of the years that the videos were covering it is understandable on why they are stills. I thought it was a very good listen. They took me back to my school days and alot of very good memories. I would put them in my collection as I am able to buy them.