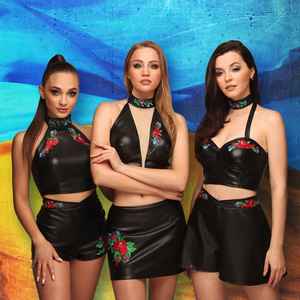 Profile:
Short Info
Mirami - fiery, energetic, positive Ukrainian girl-band, created by Andrew Bakun and Alexander Duda to bring entertaining experiences to their admirers.
The name of the band is not meaningless. Words "Mira mi" mean "look at mine..." in Spanish, and it is clear that the girls have something to show not only to Ukraine, but to the whole world. The band is combining physical beauty, as well as great vocal abilities of the singers. This is one of the few occurrences in the show business, where there is something to listen to, and not just to look at.

Biography
The project Mirami was founded in 2010 by the producers Andrew Bakun, Alexander Duda (2) (aka Alex Hitch), Oleh Kovalskyi (aka Olav Hike) and Peter Guzar (aka Peter Cliff). Andrew, a well-known composer and arranger in the West of Ukraine, became the leader of the producers team. His experience and support of the colleagues made it possible to create a project, long awaited by thousands of dance music fans. And it was a blast in the “dance music industry” not only in Ukraine, but also in other countries around the world.
It was the right kind of professional team that made it possible for the whole project to become a one of a kind separate creative unit in show business.

The process of selection of the band members was also unique. After the long casting process, the first one to be chosen was Julia Ivashkiv – singer, linguist, journalist, who besides everything mentioned above, also took part in beauty contests. Yana Stinkus, whose thirst for new experiences helped her to become a professional model and singer, was the next one to join the band. She consequently became the First Lady of the city of Ternopil in 2010. The third member of the band – Martha Mokh was almost immediately replaced by a blond-haired girl Oksana Karpiak after filming of the video for the song “Sexualna” (“Sexy”). The presence of a blond character in the band created a feeling of completeness for the producers and Mirami was fully prepared and eager to begin recording their debut album.

“Sexualna, nebezpechna…” (“sexy, dangerous…”) – these words are probably known to everyone…

It was the single “Sexualna” (“Sexy”) that hit the charts on the radio and TV programs in Ukraine. Mirami shot the debut video with a famous rapper VovaZiLvova and introduced it on the national music channel M1. The single held top positions in the Coolbaba.cc chart for over two months and became one of the most played singles on many radio stations.

Professional demeanor of Mirami in music and on stage was immediately noticed by selective, in terms of musical tastes, European audience. There it was… “Sexualna” (“Sexy”) set the dance floors on fire in Poland, Czech Republic, Slovakia, Lithuania, Germany, Estonia, Latvia, Bulgaria, as well as Russia and Belarus.

When the Ukrainian version of the song lyrics wass sang by the whole Europe, Mirami got invited to a unique event in the world of the Polish show business – All Star Concert "Hity na czasie 2011" ("Current Hits 2011"), held by ESKA radio station. More than a hundred thousand people in the square, and millions of viewers at their TV screens watched the girls’ performance and sang with them "Sexualna, nebezpechna…" ("Sexy, dangerous…")!

After such a busy schedule, the band released their debut album "Miramimania" in collaboration with the music company Magic Records (Universal Music Poland). Released in September 2011, the album acquired the status of "Golden Disk" in Poland in November. In addition to this, Mirami prepared a new video for the song "Miramimania" which was the second single from their debut album.

Right after its release, the third single “Venus” (which came out in February 2012) became a best-seller in Poland. Thanks to the girls, a cover for the song by Shocking Blue acquired a club sound and got a new life.

At the beginning of 2012, because of Yana Snitkus’ decision to leave Mirami, the producers launched a large-scale casting to find a new member of the band. Among the many girls who decided to audition, Tetiana Ivaniv showed best singing and dancing skills and ultimately became the new member of the band. Tania was professionally engaged in both singing and modeling businesses and also took part in beauty pageants. The girl hardly had any time to recover from pleasant emotions, as the team got on with work.

In the early spring of 2012 Tania, Julia and Oksana left for Spain and France for the shooting of two music videos.
In the resort town of Alicante the girls filmed yet another video for the song "Summer Dreams", which became the first single for their second album. The video was made in cooperation with LayZee, a former member of the band Mr. President, also known for the song "Coco Jamboo".
Romantic Paris was the venue location for the next video, filmed for the song "Amour". It was decided to have a public presentation of the new version of the song at the beginning of 2013, on St. Valentine's Day.

In July of the same year the team started working with a renowned German label Kontor Records. Because of this, the single "Summer Dreams" was released in Germany, Switzerland, Austria and other countries.

Hardly had Mirami celebrated this great achievement, when at the beginning of August 2012 the band got into a serious car accident in Poland. Peter Guzar, one of the band’s producers, decided to leave the team after this unfortunate incident.

Regardless of all the troubles and health issues, the band left for Poland to take part in the festival "Sopot: Top of the Top – Muzodajnia Gwiazd 2012".

Right after the Sopot festival the girls took a short break to completely recover from the car accident. As early as in the beginning of fall Mirami continued their work on the second studio album, whose release was scheduled for the year of 2013.

The year of 2012 ended for the band with a wonderful spectacular concert on one of the largest squares of Warsaw. The New Year’s Eve Concert "Sylwestrowa Moc Przebojow" ("New Year's Power Of Hits") took place on the night of January 1st and gathered about 150 thousand people in the square. In addition, millions of viewers watched the live broadcast of the concert on TV channel Polsat. The biggest stars of Polish show business, such as Enej, Mrozu, Honey, Big Cyc performed on the stage, Mirami were the only foreign band that night. The girls performed their hits "Sexualna" ("Sexy") and "Summer Dreams", as well as covers for two 80's hits "Venus" and "Boys".

Ukraine, Israel and Poland - what brings together these three countries? Actually this time musical experiments brought together a Ukrainian band Mirami with the DJs project Crystal Lake from Israel in Poland! In late March 2013 in a small but very picturesque town Lidzbark Warminski (Poland), at the hotel-сastle Krasicki - the shooting for the video for their joint single "Holiday", released in May of the same year, was held.

Work on the second studio album was still in progress when Julia Ivashkiv made an announcement: "I'm pregnant." And again, a full-scale casting…

The requirements for the new band member remained the same: a sexy, dangerous girl, age 18 – 24, height 1.68 - 1.73 m, with excellent vocal skills, good looks and unsurpassed charisma!
The band producers did some excellent work. Seven worthy finalists were selected during the vocal and choreography auditions, leaving a hundred of contestants far behind. The final part of the Mirami casting was held on September 26th, 2013. Within two hours the jury, representatives of show business and the media, chose the top three contestants – Kate Kuhareva (Kate Riva), Julia Miskiv and Natalia Grybenko. No doubt, each girl of the three finalists could have won, but the producers had to choose the best of the best – and it was Kate Kuhareva (Kate Riva).
With a new member, the band continued to work on their second studio album. At the end of January 2014, the team released a new single with a video for the song "Upside Down", which the girls recorded with legendary Danzel, Belgian house-techno artist, known for his songs "Pump It Up", "Put Your Hands Up In The Air", "You Spin Me Round". The video was filmed in several cities in Belgium: Bruges, Ostend, Antwerp and Beveren.

Almost immediately after the presentation of the single and the video Mirami went on a tour to China, where they had 14 concerts during which the audience warmly greeted the Ukrainian beauties.
After a six-week stay in China, Oksana Karpiak, who had earlier found her love, decided to leave the band.
Nevertheless, the producers did not have to spend a lot of time to find a new vocalist; it was one of the three finalists of the latest casting – Julia Miskiv. Even during the casting, the judges were not sure which of the girls to choose – Kate or Julia.

At the same time another producer Oleh Kovalskyi left Mirami, as he decided to engage in some non-musical projects.

In the summer of 2014 the band, Tetiana Ivaniv, Julia Miskiv, Kate Kuhareva, went on tours. The band also participated in the festival "Disco pod zaglami 2014" ("Sailing Disco 2014") in Mrongowo, Poland.

Work on the second studio album was almost completed, a new single was almost ready to be released… Tetiana Ivaniv together with her boy-friend decided to leave Ukraine for a while, and therefore she was no longer able to sing in the band.

Since the 1st of November 2014 Tetiana Ivaniv has been replaced by a new member – Sofia Kistruga, whose voice can already be heard in the new single "Amore Eh Oh!". At the end of October Kate, Julia, Sofia, Andrew and Alex visited warm Croatia to shoot the video for this song.

In 2015, Mirami released a new album called “Sunrise” which contains a few collaborations with some dance music stars from different countries: LayZee (aka Mr. President), Danzel, Crystal Lake, Rene Dif (Aqua), Miami Rockers. The album made the girl band even more popular and brought new shows in a few other countries around the world.

In 2017, the members of the girl band were completely renewed. Mary Ivaskevych, Oksana Pidvyshenna, Jana Zhygar became the new members of the group. With these girls, 2 new singles and 2 new videos were released, namely “Instynktyvno (from Ukrainian - Instinctively)” and “Ecstasy”. “Instynktyvno” was also made in the Polish language, which was the first time in the band’s history and which was warmly accepted by Polish fans.

After those 2 singles, Jana Zhygar left Mirami in 2019 and was replaced by Julia Gutnyk.