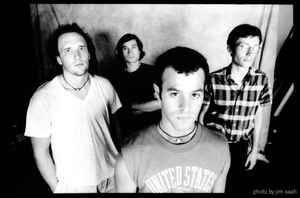 Profile:
Shudder To Think are an indie rock band formed in Washington, DC, in 1986 by Craig Wedren (vocals, guitar), Mike Russell (drums), Stuart Hill (bass), and Chris Matthews (guitar). Although usually associated with DC's punk and emo scenes, Shudder To Think blended their punk influences with pop and glam. Also making the band stand out were Werden's theatrical vocals. The group released their first LP on Sammich Records in 1989 and then moved to Dischord Records for 3 LPs. After the release of 1992's "Get Your Goat", Russell and Matthews left the group and were replaced by Adam Wade (ex-Jawbox) and Nathan Larson (ex-Swiz), respectively. This line-up released a single on Dischord before making the jump to a major label, one of only 2 Dischord acts to ever do so. Their major label debut, "Pony Express Record" received critical acclaim and scored a minor hit with the song "X-French Tee Shirt" but the band failed to find big-time success with a mainstream audience and received backlash from hardcore independent rock fans for leaving Dischord. Things were further complicated as Werden spent the next few years battling Hodgkin's Disease. Shudder To Think returned in 1997 with "50,000 BC" (and with Kevin March replacing Adam Wade) and moved into soundtrack work but split by the end of the decade.

Werden, Larson, and March reunited in 2007 with a new bassist and a third guitarist for a show in New York. The group reunited again for a tour in the Fall of 2008 and released a live album in 2009.
Sites:
dischord.com, shuddertothink.com, MySpace, Wikipedia
Members:
Adam Wade, Chris Matthews (3), Craig Wedren, Kevin March, Mike Russell (3), Nathan Larson, Stuart Hill
Variations:
Viewing All | Shudder To Think
Shudder