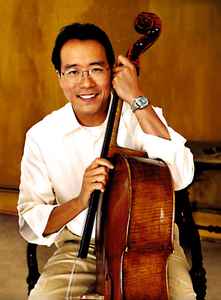 Yo-Yo Ma (simplified Chinese: 马友友; traditional Chinese: 馬友友; pinyin: Mǎ Yǒuyǒu) is a French-born American cellist, virtuoso, orchestral composer of Chinese descent, and winner of multiple Grammy Awards, the National Medal of Arts in 2001 and the Presidential Medal of Freedom in 2011. He is one of the most famous cellists of the modern age.

Yo-Yo Ma was born in Paris on October 7, 1955, to Chinese parents and had a musical upbringing. His mother, Marina Lu, was a singer, and his father, Hiao-Tsiun Ma, was a violinist and professor of music. His family moved to New York when he was five years old.

At a very young age, Ma began studying violin, and later viola, before finding his true calling by taking up the cello in 1960 at age four. According to Ma, his first choice was the double bass due to its large size, but he compromised and took up cello instead. The child prodigy began performing before audiences at age five, and performed for Presidents John F. Kennedy and Dwight D. Eisenhower when he was seven. At age eight, he appeared on American television with his sister, Yeou-Cheng Ma, in a concert conducted by Leonard Bernstein. By fifteen years of age, Ma had graduated from Trinity School in New York and appeared as a soloist with the Harvard-Radcliffe Orchestra in a performance of the Tchaikovsky Rococo Variations.

Ma studied at the Juilliard School with Leonard Rose and briefly attended Columbia University before ultimately enrolling at Harvard University. Prior to entering Harvard, Ma played in the Marlboro Festival Orchestra under the direction of nonagenarian cellist and conductor Pablo Casals. Ma would ultimately spend four summers at the Marlboro Music Festival after meeting and falling in love with Mount Holyoke College sophomore and festival administrator Jill Hornor his first summer there in 1972.

However, even before that time, Ma had steadily gained fame and had performed with most of the world's major orchestras. His recordings and performances of Johann Sebastian Bach's Cello Suites recorded in 1983 and again in 1994–1997 are particularly acclaimed. He has also played a good deal of chamber music, often with the pianist Emanuel Ax, with whom he has a close friendship back from their days together at the Juilliard School of Music in New York.

Ma currently plays with his own Silk Road Ensemble, which has the goal of bringing together musicians from diverse countries all of which are historically linked via the Silk Road, and records on the Sony Classical label. Ma's primary performance instrument is the cello nicknamed Petunia, built by Domenico Montagnana in 1733. It was named this by a female student that approached him after one of his classes in Salt Lake City asking if he had a nickname for his cello. He said, "No, but if I play for you, will you name it?" She chose Petunia, and it stuck. This cello, more than 270 years old and valued at US$2.5 million, was lost in the fall of 1999 when Ma accidentally left the instrument in a taxicab in New York City. It was later recovered undamaged. Another of Ma's cellos, the Davidov Stradivarius, was previously owned by Jacqueline Du Pré who passed it to him upon her death, and owned by the Vuitton Foundation. Though Du Pré previously voiced her frustration with the "unpredictability" of this cello, Ma attributed the comment to du Pré's impassioned style of playing, adding that the Stradivarius cello must be "coaxed" by the player. It was until recently set up in a Baroque manner, since Ma exclusively played Baroque music on it. He also owns a cello made of carbon fiber by the Luis and Clark company of Boston.

In 1997 he was featured on John Williams' soundtrack to the Hollywood film, Seven Years in Tibet. In 2000, he was heard on the soundtrack of Crouching Tiger, Hidden Dragon, and in 2003 on that of Master and Commander: The Far Side of the World. He collaborated with Williams again on the original score for the 2005 film Memoirs of a Geisha. Yo-Yo Ma has also worked with world-renowned Italian composer Ennio Morricone and has recorded Morricone's compositions of the Dollars Trilogy including The Good, the Bad and the Ugly. He also has over 75 albums, 15 of which are Grammy Award winners. Ma is a recipient of the International Center in New York's Award of Excellence.