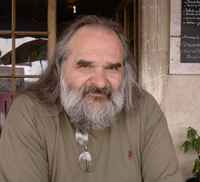 Real Name:
Alan Timms
Profile:
British mastering engineer, producer and mixer from Crawley (Sussex), living and working in Brussels (Belgium). Started his career around 1972 at Morgan Studios, London, and later moved to Morgan Studios, Brussels, where he became in chief engineer in 1975. Worked there until 1988 and in the following years held jobs at the ICP Recording Studios, Jet Studio and Impuls Studios. Founded his own mastering studio Electric City (2) in 1995.

Started off as musician in the mid-seventies in London with protopunk band Bastard (with Brian James and Nobby Goff, later Yves Kengen after they moved to Belgium). Frequent collaborator with Mike Butcher, with whom he played in several bands and had various studio projects.