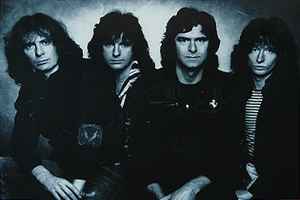 Profile:
Fastway was formed in 1982 and named after its two founders, recently departed Motorhead guitarist "Fast" Eddie Clarke and former UFO bassist Pete Way, though Way left the group before any recordings were released. Fastway's early sound was bluesy, hard rock with Robert Plant-inspired vocals; far removed from Motorhead. Led by single "Say What You Will", the album did quite well, and the followup (All Fired Up) was successful as well, but after that commercial success faded as Clarke and several varying lineups experimented with a more pop-metal sound on the succeeding releases, and they never again duplicated the success of the first two albums. By the early 90's the band was effectively done, with a brief reunion in 1998 to record On Target Reworked, featuring re-recorded tracks from the 1988 On Target release. After a period of band inactivity, Clarke put a new version of the band together. After a handful of festival appearances in 2007, in 2011 the band released Eat, Dog, Eat via SPV/Steamhammer and Secret Records.