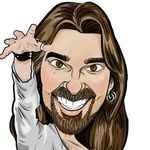 Primarily a solo project by Cédric, Talamasca was founded in 1996 with Steve Eli and Javier De Galloy that were at that time house producers and had their own music studio. They decided to cooperate on a trance project and founded Talamasca. Steve and Javier gave all the possible advices to Cedric, who after six tracks continued Talamasca on his own, releasing over 100 tracks in the years to come.
The name "Talamasca" is derived from the name of a society of psychic detectives in the books of Anne Rice.

Cédric is very energetic, travels all around the world and has many friends amongst other psy-trance artists. Many tracks were also made in cooperation with other producers, such as Nomad, Oforia, Space Cat, and Xerox. The group participated in founding the label 3D Vision (together with Christof Drouillet, DJ Mael and Javier de Galloy).
Sites:
talamasca.fr, SoundCloud, Facebook, MySpace, Wikipedia, Twitter, Posterogs
Members:
Cédric Dassulle, Javier De Galloy, Stéphane Benhamou
Variations:
Viewing All | Talamasca
Talamacsa, Talamaska