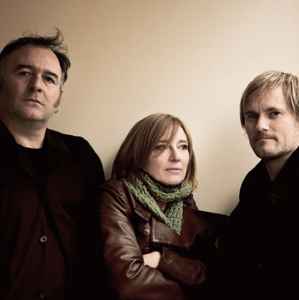 Profile:
Portishead are an English band formed in 1991 in Bristol. They are often considered one of the pioneers of trip hop music. The band are named after the nearby town of the same name, eight miles west of Bristol, along the coast. Portishead consists of Geoff Barrow, Beth Gibbons and Adrian Utley, while sometimes citing a fourth member, Dave McDonald, an engineer on their first records. Live shows also featured DJ Andy Smith. Their debut album, Dummy, was met with critical acclaim in 1994. Two other studio albums were issued: Portishead in 1997 and Third in 2008.
Sites:
portishead.co.uk, Facebook, geoff_45.tripod.com, imdb.com, Last.fm, MySpace, Twitter, whosampled.com, Wikipedia, YouTube
Members:
Adrian Utley, Beth Gibbons, Geoff Barrow
Variations:
Viewing All | Portishead
Daehsitrop, Hortispead, Portis Head, Portished, 波提斯黑合唱團

January 19, 2023
Hail to EMS! General synth for this band.
Some of their tracks reminds me an older Haus Arafna material.

This band is truly one of a kind. An ultimate ode to melancholy. In fact, you can even mark parts of your spiritual live by so-called "Portishead phase". They nailed themes of existential crisis, tainted love and self-doubt, even reflected a tad upon anti-war themes and politics. It's pretty rare when someone like Beth Gibbons invent such sincere, heart-felt and fragile poetry. This woman is larger than air. Her vocals comes straight from a heart, rather than mouth. Geoff Barrow done some of the most amazing sampling for songs, whilst Adrian Utley's distinct blues guitar parts became some sort of icing on the cake for this musical package.
Though Portishead studio albums are very rich with various post-effects, i like their live performances even more, that's saying how skilled they are as musicians. I savor each album by them. It's not a commercial music in any sense, because after only a third album they've released just 2 singles - "Chase The Tear" and "SOS" (ABBA cover). The first one was a part of Salvation Army event, the 2nd was a part of a protest against the man who killed chairman of British Parliament, because she was against Brexit. Now that's what i call an artist's career!

I must say the only reason Portishead could ever sound "dated" is that they've been painstakingly imitated for the past decade, to various degrees of success. Beth Gibbons' voice epitomizes yearning and heartache. And while I can't say that Andy Smith's turntablism is astounding, or that Geoff Barrows' productions are groundbreaking by today's standards, taken as a whole the group's work is unique, and was absolutely unrivaled in its day.

April 3, 2003
As a note of interest, there was an album called "Pearl" released that claims to be from Portishead. I have that album, and the cover and liner notes are very convincing. However, the album is actually by a group called Mandalay. I have their album (my version's called Solace) and it's exactly the same thing. It does sound a bit like Portishead, but definitely isn't. A cool collector's item, though...
See 3 replies