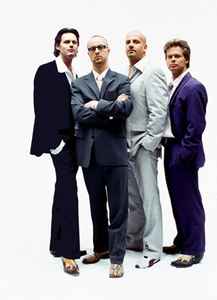 Profile:
Dutch-language rock group. BLØF is founded in 1992 in the windy coastal province of Zeeland (The Netherlands).

First drummer of the band was Henk Tjoonk. He was replaced by Chris Götte, due to problems with the other members.
Chris Götte performed the drums from September 1997, until he died the 17th of March 2001 in a traffic accident.