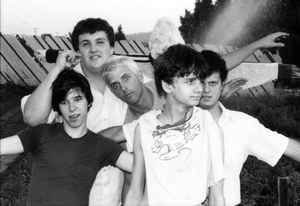 Profile:
The Adolescents are a punk rock band from Fullerton, CA, USA. The band has broken-up and reunited a number of times and have gone through a number of line-up changes. The band was formed in 1980 by Steve Soto, who had been the original bass player for Agent Orange (7), when he hooked up an Agent Orange fan named Tony Brandenburg (better known by his multiple aliases: Tony Reflex, Tony Cadena, Tony Montana (4)). Soto then approach guitarist Rikk Agnew, but Rikk recommended his younger brother, Frank, instead. The line-up was then rounded out by guitarist John O'Donovan and drummer Peter Pan (10). Rikk Agnew quickly changed his mind about playing in the band and soon O'Donovan and Pan were replaced by Rikk and his friend, Casey Royer, respectively. This line-up recorded the band's first 7", "Amoeba", in 1980 and the band's self-titled LP (often referred to as "The Blue Album") in 1981. The Blue Album would prove to be a very influential record and the band's most popular release. Rikk Agnew departed shortly afterwards. He was initially replaced by Pat Smear and then Royer's roommate Steve Roberts (4), who appeared on the band's follow-up 7", "Welcome To Reality", also released in 1981, but the band split shortly afterwards. Montana, Rikk Agnew, and Steve Soto reunited in 1986, adding drummer Sandy Hanson and guitarist Alfie Agnew (Rikk and Frank's younger brother). This line-up released "Brats In Battalions" in 1987. Alfie left after the recording and was replaced by Dan Colburn. Colburn was later replaced by Paul Casey (3). Tony left the following year and Rikk and Steve shared vocal duties for 1988's "Balboa Fun Zone". Frank Agnew returned to the fold shortly afterwards and the Blue Album line-up even reunited for some live appearances in 1989 (one of which was released as the album "Return To The Black Hole" in 1997) but the band split again the same year.

The Adolescents remained dormant throughout the 1990s but members participated in a number of different bands. In 2001, the Blue Album line-up reunited again to play shows live shows. Casey Royer and Rikk Agnew soon bowed out but the band. By 2006, Steve Soto and Tony Brandenburg were the only remaining members of the band's original line-up. Backed by a revolving cast of guitarists and drummers, the band continued to record and tour, releasing a steady stream of albums throughout the 2010s. In 2017, Casey Royer and Rikk Agnew launched the Radolescents, a group composed of various ex-Adolescents members dedicated to playing music from the Adolescents early days. On Jue 27, 2018, Steve Soto, the only member to play with the band through every phase of their career, passed away unexpectedly at age 54, just prior to the release of their album "Cropduster".
Sites:
theadolescents.net, Facebook, Facebook, MySpace, Twitter, Wikipedia, Bandcamp
Members:
Alfie Agnew, Armando Del Rio, Casey Royer, Dan Colburn, Dan Root, Derek O'Brien, Frank Agnew, Georg Ruthenberg, Ian Flannon Taylor, John O'Donovan, Mike Cambra, Mike Mcknight, Paul Casey (3), Peter Pan (10), Rikk Agnew, Sandy Hanson, Steve Roberts (4), Steve Soto, Tony Brandenburg
Variations:
Viewing All | Adolescents
The Adolescents

(I’ve got) RECOMMENDATIONS by patricepatrick
Music by Yorik123
Shows by impersonator
Favorites of mine by jimthemailman77
Concerts by funkateer45
Artists and Bands I Like and Recommend by Andrew_Lawson
Bands/artist I've seen by 78s_addict
Bands and Artists MagicGeeko has Seen Live by MagicGeeko
Artists In My Music Collection by ruido
Artists I've seen live by butmun
Artists I've Seen Live by quoth_the_raven
Bands I Have Seen Live by themisfitsvault
“The Encyclopedia Of Punk” by crimsonmetal74
Favorite artists by patlebouc
Bands I Have Seen Live by Xopher.tm
Burning Heads covered it by TwinPowerForce
Bands I Saw Before I Turned 21 by mr.dna
Seen live by Fafacakes
Great music, Weird Music, Important Music by Laughing_Chaos
Bands I've Seen Live by SWEETXPIE
seen live by Selecta-cut
Bands I Have Seen by harkusinatra
best bands ever by thijmen.temmerman
Seen em! & They were good by jasn702
VISIONARIES, TRAILBLAZERS, OUTLAWS, SONIC ASTRONAUTS, WITCHES, WIZARDS, SLUDGELORDS, VIXENS, NOISE MONGERS, GENIUSES & BEAUTIFUL WEIRDOS that you should hear before you die. by GonzoZoltard
Artists in My LP Collection by sillypenta
Bands In My Collection - A by TragicVision504
Cool Bands & Solo Artists by SimoniousC
Bands: Music I Have Seen Live by tekkno-guy
Favorite Artists by Unraveling2010
Hardcore by melvinqwerty
Hardcore by Viscera
View More Lists →