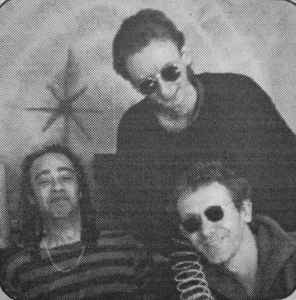 Profile:
Dimension 5 was originally started up in 1989 and released their first single (Utopia) in 1990. They thereafter stayed with D5 records for a while, but fell out due to musical differences; and Kerry and Nick started up their own label (Intastella) to release their music.

Dimension 5 described their music as "space techno psychedelic trance" around the time of their debut album (Transdimensional) and cited Hawkwind, Gong, Tim Blake and Tangerine Dream as some of their major influences. The psychedelic rock influences were later toned down and became more of a crossover to what they called "spacey techno". This is evident on their second album (Second Phaze), which has a harder and more tribal feel. They were joined on this release by Norwegian Christer Borge-Lunde (Ra / Electron Wave).

November 21, 2019
Dimension 5 gave us "Transdimensional", which is probably the best goa trance album of all time, and for that they deserve the utmost respect and honor.

After 1997, goa trance started to devolve into harsher and minimalist psytrance. Dimension 5 where not done yet. Instead of following the crowd in that direction, they (or some of their members) worked towards the release of 4 great and unique albums in 2000 on Blue Moon Productions: "Second Phaze" plus albums under the aliases "Ra", "Hunab Ku", and "Electron Wave". In doing this they further cemented themselves as top producers in the goa trance genre.

The "Blue Moon UK Sampler" is a joke, literally a testament to the greed and manipulativeness of a certain DJ from Quebec, and ought to be ignored. TransAddendum is good but not on par with their earlier albums. Like so many producers who come back after a long hiatus to appease their fans, this work failed to live up to the high standards they had previously established.
See 3 replies