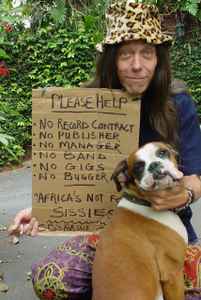 Profile:
Sydney Stanley Kitchen (14 February 1951 – 22 March 2011), was a South African guitarist, singer-songwriter and poet. Because of his uncompromising attitude towards the music industry he became an iconic figure in his native South Africa, and also around the world, albeit in relatively small circles. Up until his death he was the only artist to perform at every single Splashy Fen festival. He was known for the socio-political messages of his lyrics, while the title of his 2001 album, Africa's Not for Sissies, became one of the most popular one-liners in South Africa. A documentary film was recently released on his life entitled "Fool in a Bubble". Kitchen's career of over 45 years as a performing musician gave him a richly varied musical background. He was involved in a host of musical ventures that included Harry was a Snake, an experimental acoustic outfit, Curry and Rice with guitarist Steve Newman, the seven-piece jazz outfit Equinoxe, Bafo Bafo with Zulu guitarist Madala Kunene, The Aquarian Quartet with fellow aquarians Tony Cox, Steve Newman and Greg Georgiades and of course his own solo career.