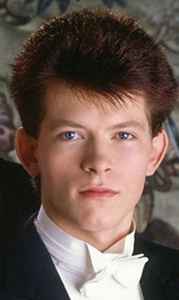 Dave was the drummer for Hot Cuisine before leaving to briefly join Clock DVA after their split up in 1981. He joined ABC in 1982 to play on their debut album "The Lexicon Of Love". He left after the Mantrap world tour in 1983 to join the Yellow Magic Orchestra. In 1985 he played on a couple of tracks on the Zillionaire album and re-appeared briefly as a band member for the release of "Ocean Blue". Also he formed his band "Person To Person" releasing their debut lp "Stronger Than Reason" in 1985. In 1989 he played on "Up" and in 1998 he wrote a number of tracks with Martin Fry and his song-writing partner Chuck Kentis, including "Peace And Tranquility".