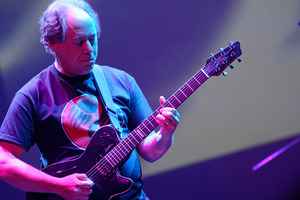 Profile:
Seattle-based guitarist Dennis Rea recording career started as a member of the electronic music group Earthstar in the late 1970s and early 1980s. He is probably best known for his work with Jeff Greinke in Land and as the leader of Moraine. Rea's first solo album, "Shadow In Dreams" (1990), was one of the first releases in mainland China by a western musician on the state record label. His second solo album, "Views From Chicheng Precipice" (2010), radically reinterprets some of the traditional Chinese music he learned 20 years earlier. Rea is also the guitarist for Iron Kim Style and Ting Bu Dong.

Rea has performed on three continents at events including the WOMAD Festival, Beijing International Jazz Festival, Bumbershoot Arts Festival, and the Earshot Jazz Festival. His group Moraine opened NEARfest in 2010.

January 14, 2017
FantaZtik Music Take a minute to listen to this phenomenal guitarist and composer