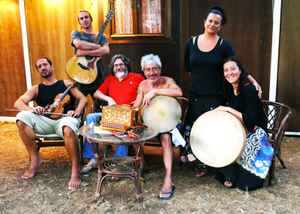 It soon sparked off the revival of the Pizzica-Pizzica, one of the oldest and most fascinating /vibrant types of rhythm and traditional dancing in Salento.

Today Officina Zoe is the most popular expression of the Pizzica and Taranta also thanks to the film director Edoardo Winspeare’s successful movies "Sangue Vivo"(Fresh blood) and "Il Miracolo"(The miracle ") featuring Probo as an actor as well as Pisanello and Marzo as soundtracks writers.
Their soundtrack won them the prestigious award of Grolla d’Oro at the Saint Vincent Festival as well as the nomination at Nastro Argento

Officina Zoe have not only triggered off the revival of Pizzica, they have also broadened its repertoire of songs and music gallery with their original tracks which preserve the spirit of social dance in its traditional forms.

This is why they are rightly seen as the "healthy carriers" of an old style which still thrives and continously changes.

Officina Zoe today pride themselves in taking part in the most important national and intenational music events, such as Womex in Berlin, the Festival In Villa Ada in Rome (where they have taken part for 10 editions), the Premio Tenco in Sanremo, the Womad di Peter Gabriel in Palermo, the Festival "I suoni delle Dolomiti" in Trentino, and music essay "Voix de femmes" in Brussels, just to name a few.
Sites:
officinazoe.com
Variations:
Viewing All | Officina Zoè
Officina Zoé, Zoè