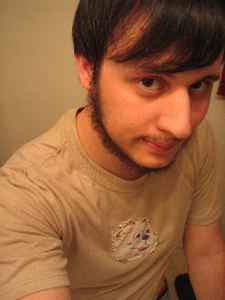 Real Name:
Brian Grainger
Profile:
Brian Grainger started making music somewhere after his parents' divorce in 1997. He played multiple instruments in a number of different bands and projects, teaching himself how to play guitar, drums, bass and keyboard without the aid of classical training. In 2001, Brian began dabbling in psychedelic and ambient music, and by 2002 he became interested in writing computer-produced (but still organic) songs. Doing simple recordings with a four-track, guitar, organ and a drum machine, he adopted the Parallax moniker and slowly progressed into a unique and expressive aesthetic for himself. By May of 2004, Brian had completed 6 albums under the Parallax name before retiring it and releasing music as Milieu. Brian currently lives with his wife Sophia and his pets in Columbia, South Carolina.
Sites:
milieu-music.com, Bandcamp, Facebook, SoundCloud, YouTube, MySpace
Aliases:
AQV, Bike (2), Brian Grainger, Coppice Halifax, DJ Brian Damage, Dorian Albatross, Parallax (6), Phe_, Pink Space, Teenager, The Analog Botanist, TMA3, Tom Rimshot, Troth, Vhom

August 7, 2016
really underrated artist. but thats fine. one of those gold finds when you finally discover it. i happen to stumbleupon the works of milieu when playing a game - eufloria on steam. really nice ambient sounds. agree with another user's comment with the cross between aphex twin and BoC. mixed with some techno vibes from nathan fake. fantastic.
Reply Notify me 4 Helpful

June 2, 2013
Why Milieu doesn't come up in every discussion of prominent atmospheric ambient IDM artists is beyond me. He will from now on if I have my way.
One of the best artists that I had never heard about.
I have been listening to his prolific body of work and I haven't found one piece that hasn't been absolutely fantastic.

How lucky you are that you have now come across Milieu's Discogs page. You have found some hidden treasure.
Reply Notify me 5 Helpful

Possibly one of the most underrated electronic producers out right now. A true master of melencholy moods and mellow beats, Brian Granger has not only put out some of the best downtempo music in the last 5 years, but also most of it is free for download. A good place to start is on the Excellent Experimedia label and work your way foward to the vast collection of newer releases. Top choices IMO: Night Currents, In the hills made of clouds, Beyond the sea lies the stars, Songs we found in the sand, and Sun White Sun.