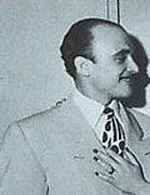 Active as a songwriter since the 1940s, he wrote the lyrics to many songs for Walt Disney movies. His best known song is probably 1948's Zip-A-Dee-Doo-Dah.