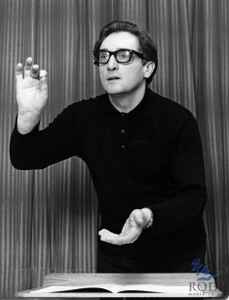 Real Name:
Pierre Van Hauwe
Profile:
Pierre van Hauwe ( Terneuzen , December January 1920 - Delft , 25 June 2009 ) was a Dutch musician and music educator of Flemish descent. Lived from 1946 and worked in Delft in education and as a Catholic church musician in the now demolished St Hippolytus . From 1960 until his retirement in 1982 he was director of the Municipal Music Technology. Pierre van Hauwe was among the biggest promoters of the Orff Schulwerk . The Orff Schulwerk was developed by the German composer Carl Orff . Pierre van Hauwe processed initially the musical principles of Orff Schulwerk in four books "Music for Youth ', published from 1961. In conjunction with the method of the Hungarian composer and educator Zoltán Kodály developed Pierre Hauwe for Netherlands Music Method" play with Music ". This method has been fully used at the music school for education in the general music education (AMV) and proved an excellent preparation for instrumental education then followed. Also, all nursery and primary schools (and later the primary schools) in Delft used well into the nineties this method. From the music school general music education consultants guided the teachers in the schools. In many municipalities, this example was followed in the Netherlands. During the seventies, this method has been translated into several languages ​​and was therefore a large number of users at home and abroad. In the German states of Baden-Wurttemberg and Bavaria , the method "Spielen mit Musik" also used a lot, both on "Grundschulen" as in "Musikschulen". The method appeared except in German also in Russian, Lithuanian, Czech, Polish, Hebrew, Norwegian, Danish and Portuguese for use in Portugal (including the island of Madeira ) and Brazil . For use in Mexico and several countries in South America published a Spanish translation. Music Orchestra from Delft made ​​in the seventies and eighties of the 20th century large travel to countries where the music method "Play with Music" was used. In 1978, traveled by train to Lublin ( Poland ) and Vilnius ( Lithuania ). In 1979 and 1980 the bus to Portugal and a few years later by plane to Madeira and Israel . Often was daily performed in schools and churches to show and hear what could be achieved with the educational principles of the "Play with Music" method. But there was also performed in major concert halls. Pedagogical principle in the orchestras was that every music student from AMV-school age to young adults at every level of musical development could get a place in a music band. Piano Students often found their way onto the Orffinstrumenten, strings and brass orchestra were parties at their own level on the desk. A great flute choir in 4- or 5-part set was a solid core in these orchestras, as all music students had learned in elementary recorder AMV. Music or music school orchestras in Inning am Ammersee (Bayern), Prague and Porto bearing the name of Pierre van Hauwe.
Sites:
Wikipedia, osdiscography.com
Variations:
Viewing All | Pierre Van Hauwe
P. v. Hauwe, Pierre van Hauwe