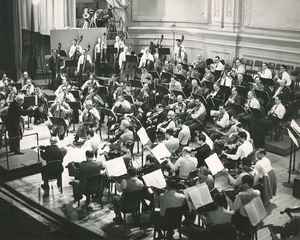 Profile:
Founded: 1937 - New York, USA
Disbanded: 1954
This was a fabled orchestra specially constituted by David Sarnoff, chairman of RCA (which owned both RCA Victor Records and NBC radio) for conductor Arturo Toscanini. Offering the highest salaries of any orchestra at the time and a 52-week contract, NBC attracted top orchestral musicians: 21 of them were former section leaders of other orchestras. Artur Rodzinski was hired to train and mold the Orchestra to impeccable standards in anticipation of the leadership of Arturo Toscanini. The Orchestra took the air under Toscanini on Christmas day, 1937. It was immediately ranked as one of the world's great orchestras, famed for its precise and lean sound. It made numerous classic recordings for RCA, sometimes recording as the "RCA Victor Symphony," including the famous recording of Richard Rodgers' Victory at Sea (a 13-hour musical score), and worked with famous conductors such as Leopold Stokowski (who was co-conductor from 1941 to 1944). Arturo Toscanini led the Orchestra for 17 years.