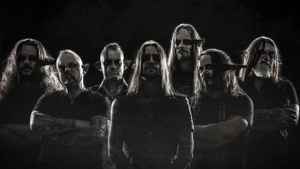 Finntroll was established in 1997 by Teemu "Somnium" Raimoranta (guitar) and Jan "Katla" Jämsen (vocals) who had the vision of fusing the darkness and grandeur of black metal with the traditional Finnish hoedown-music. Group's original line-up was completed in 1998 by Skrymer, Tundra, Trollhorn and Beast Dominator and their debut album "Midnattens widunder" was released in 1999. Altogether they have released six full lengths, the last one being 2013's "Blodsvept".

Despite being a Finnish band, Finntroll chose to write their lyrics in Swedish due to their original vocalist Katla being Fenno-Swedish.

In March 2003 Finntroll was struck by the tragic death of the guitarist Teemu "Somnium" Raimoranta.

December 25, 2021
I've loved it for sixteen years.My favorite band, none of them！
Reply Notify me Helpful