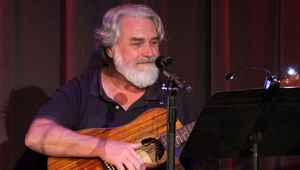 Profile:
American multi-instrumentalist and singer, born on February 25, 1950, in Hawthorne, California. Died on July 19, 2020.
In the '60s he played drums for a number of groups (The Palace Guard among them) before founding The Merry-Go-Round in 1967.
Between 1970 and 1973 he released four solo albums; writing, producing, and playing every instrument on three of them (Emitt Rhodes / Mirror / Farewell To Paradise).
Sites:
Wikipedia, emittrhodesmusic.net, MySpace
In Groups:
The Emerals, The Merry-Go-Round, The Palace Guard
Variations:
Viewing All | Emitt Rhodes
E. Rhodes, E. Rohodes, Emitt L. Rhodes, Emmet Rhodes, Emmett Rhodes, Emmit Rhodes, Emmitt Rhodes, R. Emitt, R. Rhodes, Rhodes

May 20, 2022
Shit !!!! What a shame. The pretty faced next door neighbour with such talent!!!
I missed out on his passing away. Such a loss and why wasn't he a huge hit in the years then?

July 29, 2020
Rest in peace Emitt, you beautiful musical soul. A brilliant artist. See you again and the rainbow’s end

July 26, 2020
It's always a bittersweet feeling to discover such a great artist only after hearing that they've passed away. But my god, Emitt's entire discography is fantastic, even Rainbows End. You can tell he still had the songwriting chops til the very end. Rest easy.