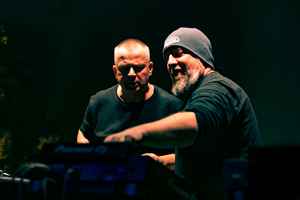 DJ and producer duo started in in 1999. Their style was uplifting hard house, acid, techno and hard trance. Their biggest hits have been 'Phatt Bass' and 'We Will Survive' which went top 10 in several countries including the UK and Germany. At the beginning in group were Jurgen Dohr and Oliver Goedicke. Jurgen Dohr left in 2010. From 2014 Warp Brothers are Oliver Goedicke and Peter Sildegren.

January 6, 2015
I think it's time somebody provided a real bio for these guys and since I am probably their biggest fan, then maybe I should. The Warp Brothers, by now a legendary DJ duo, was founded by Oliver Goedicke in 1999 (sources say), who is also founder of D.O.N.S. ("Pump Up The Jam" feat. Technotronic, 1997) and his partner in crime, Jürgen Dohr, who in the beginning (I believe) was mostly with his own group, Bad Habit Boys. Most people only know them by those two singles: "Phatt Bass" and "We Will Survive" but they had so much more to offer and I feel they were overlooked and thus underrated. In my opinion, these guys put together some of the "baddest" hard-hitting DJ sets that I have ever heard, and I just got into them about 3 years ago.
The first DJ-Mix CD I ever heard from these guys was Tranzworld 6.0 (2003 Webster Hall Records), in a time when I was seeking among the underground for good music because everything else that comes out these days and on the radio just simply doesn't cut it, or neither provides a good listen for that matter. When I heard this CD, it totally blew my mind, and to think that they are being sold on Amazon for a cent (+ 2.99 shipping at the time). It had everything I wanted in a mix CD, it was cool, dark, and hard. It was simply "badass." After that, I made it my business to collect all their Mix CD's and Livesets. Another thing I like about these guys is that they are never afraid to change up their style a bit while retaining those basic elements that they are known for.
Just in case nobody has heard, they just made a comeback last year on November 11, released a remake of "How You Like Bass" (for those of you that haven't heard the original, it's by Norman Bass "The Warp Brothers Remix") and its sure to wreck the clubs and cause an uproar, just as the original did. Jürgen didn't return this time (farewell friend and best wishes), but the new warpie that has taken his place is Maurizio Inzaghi, who I know little about but I eventually will.
Ollie if you read this, you rock. Keep doing things the way you do it, I read a lot of criticism (from people's comments) concerning your 'change in style' as the Warp Brothers but, after listening to virtually almost everything from the Warp Brothers, I trust your production, mixing, and selection. You guys are my heroes and every time I wanna get a pump of energy, I just "blast y'all from my speakers." I would message y'all on Twitter and Facebook but I'm not too fond of social websites (I know, maybe one day I'll get over it).
If anyone is interested, I am on SoulSeek (If you are not familiar, google it, download, and install) and maybe we can share some of these guys Mixes and Livesets. I am still seeking this one: