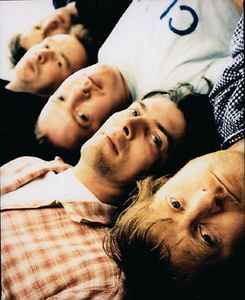 Profile:
London-based group formed in 1992.
Much of the story of the High Llamas is the story of Sean O'Hagan. O'Hagan worked with Cathal Coughlan in the group Microdisney, formed in 1980, until the group disbanded in 1988. O'Hagan then released a solo effort titled High Llamas, the title and album cover of which came from a magazine picture of a Victorian hot-air balloon. In 1992, O'Hagan formed the High Llamas and recorded the "Apricots" mini-LP. Mute Records took five of the six tracks on "Apricots," added four more tracks, and released it as the High Llamas' debut full-length, "Santa Barbara". Their next album, "Gideon Gaye", met with high praise from critics upon its release in 1994. Since that time, the Llamas have been putting out pop records on a fairly consistent basis, the most recent having been released in 2016.
Sites:
highllamas.com, Wikipedia
Members:
Dominic Murcott, John Bennett (4), Jon Fell, Marcus Holdaway, Pete Aves, Rob Allum, Sean O'Hagan, Tom Fenner
Variations:
Viewing All | The High Llamas
High Llamas, Hight Llamas, The High Lamas