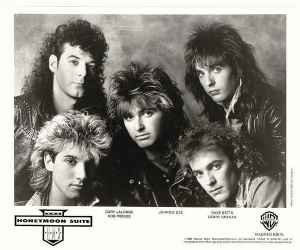 Profile:
Honeymoon Suite are a Canadian rock band, based out of Niagara Falls, Ontario that formed in 1982. The band's name was a nod to the fact that Niagara Falls is the unofficial honeymoon capital.

The band was originally formed in 1982 by lead vocalist and guitarist Johnnie Dee (of Niagara Falls, Ontario, Canada), guitarist Derry Grehan (of St. Catharines, Ontario, Canada) and original drummer Mike Lengyell, formerly with the Diodes. They soon signed with WEA Canada after they released their song "New Girl Now", which won them an unsigned band contest put on by Toronto radio station Q107.

In 1984, they released their self-titled debut album, which led to four big hits in Canada: "New Girl Now", "Burning In Love", "Wave Babies", and "Stay In the Light". The song "New Girl Now" was the only single to reach the top-50 in the United States.

Their follow up album, The Big Prize, produced by Bruce Fairbairn, was equally successful in Canada, with four more hits: "Feel It Again", "What Does It Take", "Bad Attitude", and "All Along You Knew". Their song "Feel It Again" managed to reach the Top 40 in the US, but "What Does It Take" only reached no. 52, even buoyed by its inclusion on the soundtrack for the John Cusack film One Crazy Summer. In 1989, "Bad Attitude" was featured in the series finale of Miami Vice, played during a driving segment that mirrored one from the series' pilot episode.

Also during 1986 the band produced a track for the Charlie Sheen film The Wraith - "Those Were the Days".

In the spring of 1987, the band produced a track for the Mel Gibson film Lethal Weapon - "Lethal Weapon".

In the winter of 1987, the band started work on their third album in L.A. Unfortunately, Johnnie Dee was hit by a car at L.A.X. airport, breaking his leg in several places, and required surgery to insert a ten inch pin to help the leg heal properly. While recovering in hospital, Doobie Brothers' Michael McDonald was brought in to help out with the recording sessions; he wrote lyrics and sang back up on "Long Way Back", a forthcoming track for their next album.

In 1988, their third album was finally released: Racing After Midnight, produced by Ted Templeman of Van Halen fame. That album made the top 10 in Canada, but was not successful in the US. Singles included "Love Changes Everything", "Looking Out for Number One", "Cold Look" (European only) and "It's Over Now".

In 1989, the band released their first greatest hits compilation, The Singles, which included the new single "Still Loving You". Coburn rejoined the band in time to embark on "The Singles" tour, which would turn out to be the last tour featuring the band's original line-up until 2007.

By 1991, Lalonde and Betts had left the band, and were replaced by Steve Webster (from Billy Idol's band) on bass and Jorn Anderson from Fludd on drums. That year, they released their fourth album, Monsters Under the Bed. The album featured the singles "Say You Don't Know Me" and "The Road". The album was only moderately successful in Canada and virtually ignored in the US.

The band continued to tour in the '90s, although many line-up changes continued to occur, with only Dee and Grehan remaining as the founding members.

In 2002 they released their first new studio album in 11 years, Lemon Tongue. The album was released under an independent label, and leaned towards a more artistic and adventurous direction than their previous rock releases. The European release of this album was titled Dreamland, and featured many track changes, adding the new songs "Dreamland", "Radiant", "Even Now" and "Just Love Somebody".

In 2006 the band released another greatest hits collection entitled Feel It Again: An Anthology, a 2-CD set featuring most of the band's singles, selected album tracks, and rare and unreleased material.

The band continues to tour Canada and select Northeastern United States cities. In June 2007, the band officially announced the return of a reunited classic line-up of Johnnie Dee, Derry Grehan, Ray Coburn, Gary Lalonde, and Dave Betts. The band has toured extensively throughout Canada, with further dates planned for 2008 and talk of recording a new album together.

The fruit of the reunion will be the new CD “Clifton Hill”, produced by Tom Treumuth (who produced the debut self-titled Honeymoon Suite album in 1984) and named after the famous landmark in the centre of the tourist activity in Niagara Falls, was released by Italian melodic rock record label Frontiers Records on October 10th 2008. The new album is described by guitarist Derry Grehan as "somewhat of a return musically to the sound that we had in the 80's". Oddly enough, Gary Lalonde and Dave Betts definitely do not appear on the new cd according to the credits which disappoints many long-time fans. It is unclear if Ray Coburn appears on the cd as the keyboardist credited is another Canadian musician named Ray Cockburn.
Sites:
honeymoonsuiteband.com, Wikipedia, Last.fm
Members:
Dave Betts, Derry Grehan, Gary LaLonde, John DeGiuli, Ray Coburn, Rob Laidlaw, Rob Preuss, Stan Miczek, Steve Webster
Variations:
Viewing All | Honeymoon Suite
ハネムーン・スイート

The cassette album containing (The Extended 12 '' Mix Of "Lethal Weapon") should be listed,as it was released during the same time In Canada.....

April 22, 2013
I attempted to add the Japanese 3-inch single for Love Changes Everything to the existing listing but somehow I managed to create a new listing. Does anyone know where I went wrong?
Reply Notify me Helpful