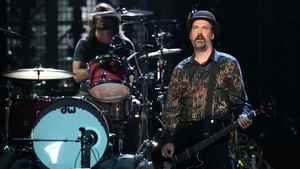 Real Name:
Krist Anthony Novoselić II
Profile:
American rock musician born May 16, 1965 in Compton, California. He is best known as the bassist for Nirvana. In addition to Nirvana, Krist has played for Sweet 75, Eyes Adrift, and Flipper. Apart from his musical endeavors, Novoselic has been active politically, including the creation of the political action committee JAMPAC. His first name is pronounced both "Chris" or "Krist".