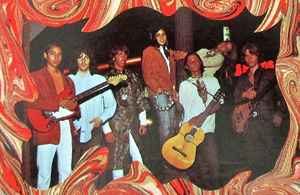 Profile:
The Animated Egg were a studio-only group that issued a self-titled album of psychedelic instrumentals in the late '60s. It's now known that the chief instigator behind the Animated Egg was renowned Los Angeles session guitarist Jerry Kolbrak aka Jerry Cole, whose fuzzy leads (with some electric 12-string, surf, and Latin lines as well) dominate the arrangements. Cole also wrote the material, and though he was unsure of the other personnel when asked about the LP many years later, possible accompanists include Edgar Lamar and Don Dexter on drums; Tommy Lee and Glenn Cass on bass; Billy Joe Hastings and Norman Cass on guitar; and Billy Preston on organ. The Animated Egg, despite the high instrumental talent involved, sounds rather like it was thrown together in the studio to capitalize on the fad for psychedelic sounds, Cole playing on several other similar "psychsploitation" LPs in the same era credited to different groups.
Members:
Don Dexter, Jerry Kolbrak
Variations:
Viewing All | The Animated Egg
Animated Egg, The Animated Ege

December 28, 2020
Same band as the "Haircuts and the impossibles" ...
Reply Notify me Helpful