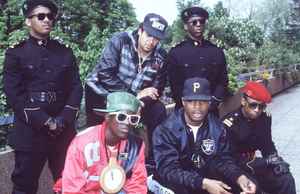 The best hip hop group ever? Chuck D's political and violent rhymes make him the best sounding rapper ever, that just about beat Rakim! Flavour Flav brings a comedic value that complaments Chuck's voice beautifully without losing the message they are trying to get across! The Bomb Squad cut every sample you could ever imagine! If you are reading this please listen to anything by Public Enemy before you listen to anything else hip hop driven and you will realise you are listening to something that revolutionised the sound of rap! Understand that this group had it all, from party jams to political messages! Respect PE! Enjoy the fact that you have discovered the sound of true rap music.

The Cutting-Edge band Public Enemy broke several parameters on the Hip Hop culture bringing the a melting pot of engaged RAP lyrics, a heavy Funk base, with the elements of the so-called Free-Jazz and even of the Musique Concrète (whose essence lies on the fragments of the natural sounds). Fierce, dense, sometimes sarcastic or even relying on a more serious point of view, Public Enemy, composed by the producers Professor Griff and Terminator X and the MCs Chuck D and Flavor Flav set trends with their two albums "It Take A Nation Of Millions To Hold Us Back" (1988) and "Fear Of A Black Planet" (1990), literally conquering the dancefloors all over the World with several massive hits - which made them one of the most sampled crews of all time.