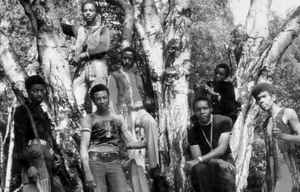 Profile:
Afro-rock group which was formed in 1968 and broke up in 1972.
Its members had all immigrated to Britain from Commonwealth countries. The band's name means "devil's children or bad policemen". They originally played soul and Blue Beat with Howard Joseph as Blue Rivers & The Maroons, but the music they heard during a trip to Morocco lead to a change in their style to what has been described as a blend of funk, rock, jazz and African music. Their album, Afreaka!, has become a popular source for sampling.
Sites:
Wikipedia
Members:
Clarance Brooms Crosdale, Paddy Corea, Ray Rhoden, Sleepy Jack Joseph, Smokey Adams, Steven John, W. Raphael Joseph