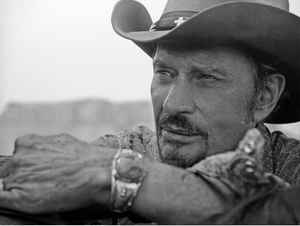 As of November 2011, Johnny Hallyday had sold more than 100 million records, and earned 40 gold records, 22 platinum records, 3 diamond records and 8 Victoires de la Musique (the French equivalent of the Grammy). 28 million spectators have attended his concerts over more than 100 tours in France and Europe. However, like most French singers and musicians, his international career never really took off. Despite some tours abroad in the 1960s and 1970s, and a concert in Las Vegas in 1996, Hallyday is virtually unknown to the public outside the French speaking world.

Rest... In... Peace... by crimsonmetal74
All Navityan Artists by NorrisR926
Seen on stage by Telecaster258
Concerts by funkateer45
Seen on stage by darkbouddha
My Great Artists by tomgboko
The best artists of the world! by pamasso1234
Artists I have seen live by JACOBSAJC
Artists I would love to see / to have seen live by slysoul
Artists for the Future by Milesbeet-hoven1
Sarko friends by TwinPowerForce
View More Lists →