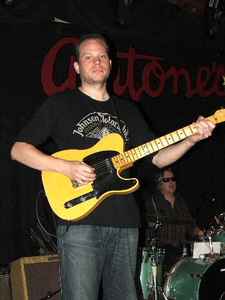 Profile:
Dutch guitarist who has played with a number of Dutch and American groups, including rockabilly, country, Americana and rock and roll bands. He is now based in Texas.
Born in Amsterdam, Jeen joined his first band at the age of 14. The Tin Stars were a rockabilly group whom he would play with for 15 years. At age 16, he began playing with rockabilly artist Ronnie Dawson. He has also backed a number of artist in European tours including Sonny Burgess, Billy Lee Riley, Joe Clay and Rudy Grayzell
In Groups:
Eve Monsees And The Exiles, Implosions, The 3 Ringers, The Modern Don Juans, The Tin Stars, Tin Star Trio
Variations:
Viewing All | Tjarko Jeen
Tjarko