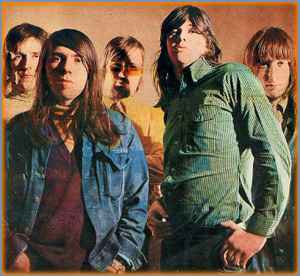 Profile:
Formed in 1965 in The Hague (The Netherlands), they made their recording debut with 'You're The Victor', a wild, rhythmic track inspired by the Pretty Things. It was succeeded by the equally compulsive 'The Life I Live', a searing slice of R&B. Q65 travelled to London to promote this release but, having been denied work permits, opted to turn the visit into a promotional tool. They returned to The Netherlands on a rubber lifeboat, taking almost 12 hours to cross the Channel. Upon landing at the Scheveningen Pier, the group was greeted by almost 30.000 cheering fans who were rewarded with an open-air concert. The menacing 'I Despise You' was followed by 'Revolution', their 1966 debut album, which blended original material with R&B standards, notably a 13-minute version of Sonny Boy Williamson's 'Bring It On Home'. In 1967 they released the 'Kjoe Blues EP'. They were into soft drag, and their sound changed. In 1968 Wim was drafted into the army. This marked the end of the first Q65 era. They regrouped in 1970 with a new album called 'Afganistan'. In 1971 'the Q' releases their third and final album 'We Are Gonna Make It'. The sound was different from their early era, more psychedelic.
Sites:
Q65.org, Bookogs, Wikipedia
Aliases:
Kjoe
Members:
Beer Klaasse, Frank Nuyens, Hans Waterman, Jay Baar, Joop Roelofs, Joop van Nimwegen, Peter Vink, Richard Schulte Nordholt, Wim Bieler
Variations:
Viewing All | Q65
Q '65, Q 65, Q' 65, Q'65, Q-65, Q.65, Q’65