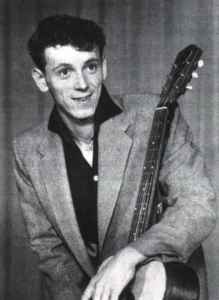 Gene Vincent, was an American musician who pioneered the styles of rock and roll and rockabilly. His 1956 top-ten hit with his Blue Caps, "Be-Bop-a-Lula", is considered a significant early example of rockabilly. He was inducted into the Rock and Roll Hall of Fame in 1998 (Performer) and the Rockabilly Hall of Fame.

Rest... In... Peace... by crimsonmetal74
Artists for the Future by Milesbeet-hoven1
The Rock'N'Roll Hall Of Fame by stassen
Industrial Culture Handbook: Sordide Sentimental: Some Records/Pre-1976 by EricLanzillotta
Wish I'd Seen Live by Don_Orr
View More Lists →