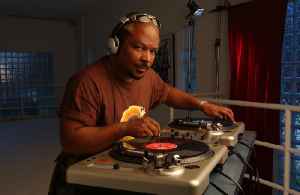 Chip E. started spinning records in 1982, by 1984 he was producing records. In 1986 Street Mix magazine declared Chip E. as the "Godfather of House Music". In 1987 he became the first (and still the only) Chicago artist to be in regular rotation on all 3 major Chicago radio stations (WBMX, WGCI, B96). Former B96 programming manager Joe Bohannon (Joe Bo) made the decision to add "If You Only Knew" to regular rotation and with that began the transition of the station from CHR (contemporary hit radio) to a Dance Music station. Chip E. took DJ/Remixer Frankie Knuckles under his wing when he co-produced Frankie’s first record "You Can’t Hide". Other artists Chip jump started into the music world were Liddell Townsel, Kevin Irving, and Harri Dennis of "The It". By the age of 21 Chip E. was a world wide name. Because of difficulties getting out of a contract with D.J. International records, Chip decided that he would rather not record if he had to do it for D.J. International. Although he does the rare DJ gig in Britain or Italy, to quote Sean Bidder’s book "House – The Rough Guide", Chip E. has moved into "the realms of mythology".
Sites:
IamChipE.com, sightsnsoundsinc.com, Facebook, Twitter, instagram.com, open.spotify.com
Aliases:
House People, I. L. Eberhart
Variations:
Viewing All | Chip E.
C.E., Chip, Chip E, Chip E Inc., Chip E. Inc., Chip E. The Godfather Of House, Chip E., Inc., Chip Eberhart, Chip-E, Chipe, Mr. E.