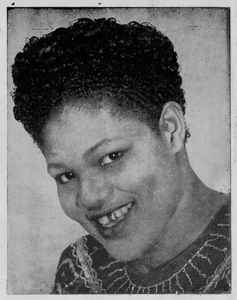 Thornton was the first artist to record "Hound Dog" (Peacock 1612), with which she had a Number 1 hit in the Billboard R&B chart in 1953 selling two million copies,. Later the same year she released "They Call Me Big Mama" (Peacock 1621). This release helped immortalize her nickname in the world of funky gospel and R&B music. She also wrote and recorded "Ball And Chain", which gained Janis Joplin attention in the late 1960s.

One of seven children, born to a Baptist church minister, she began singing and touring the South with the Georgia Hot Harlem Revue at the age of fourteen. She also played drums and harmonica and signed her first contract in Houston with Peacock Records in 1951.

In the latter part of her career Thornton appeared at the Monterey Jazz Festival in 1966 & 1968, and the San Francisco Blues Festival in 1979. In 1966 she recorded the album Big Mama Thornton With The Chicago Blues Band on the Arhoolie label. She wrote a total of twenty-two blues releases and her first name "Willa Mae" is often credited as "Willie Mae".