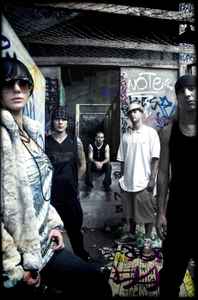 Profile:
The Fast Crew are a hip hop group from suburban Auckland, New Zealand that initially formed in 1999. After spending some time experimenting and playing live around Auckland, they released their first single, "Mr Radio", in 2002 and received high airplay on both radio and television. True success came in May 2004, though, when the single "I Got" was released, going on to spend 23 weeks on the New Zealand Top 40 Singles Chart and achieving gold status. The crew's debut album, "Set the Record Straight" was released in December 2004 and achieved gold status within a week of its release and a peak chart position of 11. Their success has been repeated in Australia, with "I Got" reaching #22 on the ARIAnet singles chart, and the band receiving three nominations at the 2006 Australasian Urban Music Awards. They disbanded in late 2008.
Sites:
fastcrew.co.nz, MySpace
Members:
Brad Devcich, Dane Rumble, Gemma Copas, Jeremy Kent-Johnstone, Josh Thorne, Rebekah Benner
Variations:
Viewing All | Fast Crew
FastCrew, The Fast Crew