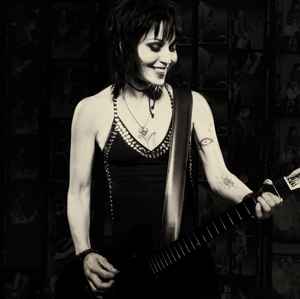 Real Name:
Joan Marie Larkin
Profile:
American rock singer, guitar player, record producer, and actress. Born on September 22, 1958, Wynnewood, Pennsylvania. As Joan Marie Larkin. After the divorce of her parents she changed her surname to her mother's maiden name: Jett. At age 15, Jett co-founded The Runaways. As the leader of Joan Jett & The Blackhearts, Jett has had eight platinum and gold albums and nine Top 40 singles. She has her own independent label, Blackheart Records. Jett has acted in movies and television, and was executive producer of "The Runaways," a film based on Cherie Currie's book about The Runaways, Neon Angel.

May 7, 2020
Awesome, inspiring, HARDCORE. My favorite artist hands down! I can never get enough of Joanie!