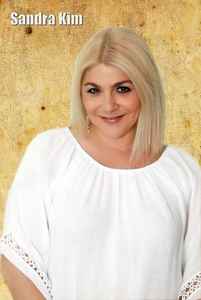 Real Name:
Sandra Caldarone
Profile:
Sandra Kim (Belgium), the winner of the Eurovision Song Contest in 1986 (3 May) held in Bergen/Norway. She won with a record number of points (176!) And records is not strange for her: she will be forever the youngest participant with a victory on the Eurovision Song Contest. Sandra was only 13 years and 7 months and unofficially too young for participation. After her victory, the age limit for participation increased to 16 years. Another record: her winning song J'aime la Vie is for 28 years Belgian only entry that finally won.

Sandra was born on October 15, 1972, as Sandra Caldarone in Montegnée, Liège (Belgium). Many Italian immigrants are located in that region. Who came mainly work in the coal mines of Belgium. Similarly the Italian family Caldarone, mother Anna Capobianco and father Guiseppe, formerly residing in the Provincia di Chieti (It). Sandra has also a younger sister Barbara and named after the favourite singer of Sandra's mother: Barbra Streisand. Sandra is a great admirer of this diva (a title that sounds familiar to Sandra on this moment)

In the nineties, she became a television presenter for "Dix qu'on aime" (Ten - songs - we love), an RTL TV show, and then moved on to become one of the panel jury for the local version of Pop Idol. Thanks to her love for the musicals, Sandra gets the role of soloist offered in the production "Musicals From The Heart 1 & 2" along with Chris Villarreal and Jan Schepens. This spectacular show is a sort of "Best of" of the most beautiful musical songs (Cats, Grease, Saturday Night Fever, Fame, Les Misérables, etc.). "Musicals From The Heart" runs in 2000 and in 2001 for several months in Flanders and the Netherlands.

On the occasion of the 10th anniversary of the accession to the throne of King Albert II, Sandra along with numerous other Belgian artists sing a song to Flemings and Walloons to get closer to each other.

In 2005, Sandra sings "No N'ho l'eta" on a big gala for the occasion of the 50th anniversary of the "Eurovision Song Contest" in Copenhagen (Denmark). Together with Micha Marah and Afi launches Sandra in 2006 "The SouldivaZ" and they sing well-known soul hits. In 2008, Sandra invited by "les Gauff" (a band from Liège) to sing together the rocksong "Highway to Hell" (AC/DC) during the Francofolies of Spa. She is performing both 2009 and 2010 during the Belgavox-festival. A big party for all Belgians where respect and solidarity play a key role. In 2009 including with Les Gauff but the following year a resounding occur with a role way for Arno Hintjens. Together they try to sing the song "J'aime la Vie"and delivers some hilarious moments. Once again a lot of credit for Sandra's entertainment.

In 2010 Sandra is already a real diva in her own country and she needs a new challenge: Sandra is prepairing to make a new album: this time with some big names in the Belgian music world as Salvatore Adamo, Dani Klein, Piet Goddaer (Ozark Henry), David Bartholomé, Anthony Sinatra (Music Club and very important for this new project) and Jacques Duval . Her new album «Make up» is very well received by the press and the public. Initially the album appears together with a magazine distributed in the French-speaking part of Belgium. On May 3, 2011 Sandra gives a concert at the Botanique on the occasion of her 25th anniversary as the only and youngest Belgian Eurovision-winner and again, she gets a lot of praise from the press.

She is a great singer and performer! She delivers a strong album and there will be released 4 singles. In between, she sings a duet with Udo, Flemish singer and her fellow-villager. The song is called "Crying Out For You" and was intended for the European market.

Currently Sandra is a welcome artist at parties and festivals. She usually gives shows with her own songs but also with beautiful covers of Barbra Streisand, Whitney Houston, Tina Turner and Céline Dion.The press regularly compared Sandra with artists like Streisand and Dion. She has the same voice power.

This year she decided to write an autobiograpghy. Probably during the spring of 2015, the book appears on the market. It's all about her victory at the Eurovision Song Contest (1986) and all the issues around that. Sandra also starts a new project with four musicians named: Sandra Kim & The '80's Factory. She will sing several great songs from the eighties like Madonna, Michael Jackson and off course her own song J'aime la Vie.
Sites:
sandrakim.be, houbi.com
Aliases:
SoulDivaz
In Groups:
Artiesten Met Een Hart, Artiesten Tegen Kanker, SoulDivaz
Variations:
Viewing All | Sandra Kim
S. Kim, Sandra, Сандра Ким, サンドラ・キム