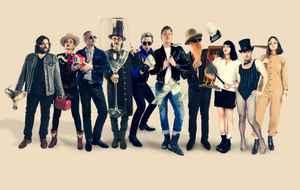 Profile:
A series of recording sessions convened by Josh Homme from 1997 to 2003 and then revived in 2019, primarily at Rancho De La Luna, a house in Joshua Tree, California filled with recording equipment and instruments. The sessions feature Homme along with the house's owners Dave Catching and Fred Drake, with and many other musicians from the Palm Desert / Desert Rock / Stoner Rock scene contributing to the series, as well as visitors from further afield such as PJ Harvey. During the sessions, songs were written on-the-spot and recorded quickly, lending both a freshness and roughness to the tracks. Some songs were later re-recorded by Homme's main group Queens Of The Stone Age.

Vol.2 - Status: Ships Commander Butchered
Featuring Josh Homme as Carlo with the same line-up as Vol.1 minus Fred Drake that is only credited as engineer.

Vol.3 - Set Co-Ordinates For The White Dwarf!!!
Featuring 2 tracks by The Desert Sessions, who consisted of Josh Homme on guitar and vocals, John McBain on guitar, Ben Shepherd inn bass, Alfredo Hernandez on drums and Pete Stahl on vocals and another 2 tracks by the Earthlings?.