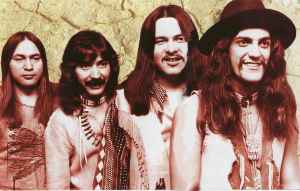 The name Redbone is a joking reference to a Cajun term for a mixed-race person, the band's members being a mixture of Native American and Mexican heritage.

Redbone played primarily rock music with R&B, Cajun, Jazz, tribal, and Latin roots. Their first commercial success came with the single "Maggie" from their second album, Potlatch, in 1970, and two other hit singles followed - "The Witch Queen of New Orleans" (1971, #21 on the Billboard Hot 100) and "Come and Get Your Love" (1974, #5 on the Billboard Hot 100). "Come and Get Your Love", written by Lolly Vasquez stayed in the Billboard chart for 24 weeks, and was awarded a gold disc by the R.I.A.A. on 22 April 1974.

I have watched the band in 1973 in Amsterdam concert gebouw,it was a very rainy day and night,i wasn't living in Amsredam at the time ,but elsewhere ,the support band was Pat Cool, a dutch band .Redbone played for 2 hours all the songs i loved to hear and danced upon the stage in their americanindian-navajo dresses.after the concert i stood at the backstage door when the 4 band members ,Lolly+.Pat Tony +,and Butch passed me by,only two inches from me. ,it was still raining outside ,and tony said ;"Hey where's our Limo ?"