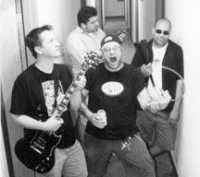 Profile:
Quincy Punx were founded in 1990 by Bob Wood - Guitar, Dave DePriest - Vocals/Lyrics, and Mike Robertson - Drums/Vocals in St. Paul, Minnesota. Throughout the years, this core line-up has remained the same, but with a "revolving door" line-up of bass players.
The first was Greg Martin, who had to leave due to chemical burns on a large percentage of his body and subsequently falling into a coma. It wasn't until Jeff, the fifth bass player, that the band actually became active. Upon recruiting the sixth bassist, Kyle, the band saw it's first release, 1992's (me) a.k.a. "Darby Was A Martyr", a 6 song 7" e.p. released on THD Records of Minneapolis, which got great reviews from Flipside, Jeff Bale, and Maximumrockandroll's Tim Yohannon. The band was then picked up by Recess records and released "Get The Humans", a 5 song 7" e.p. followed by a split label release with THD, "We're Not Punx... But We Play Them On T.V.", a 23 song L.P. which featured a cover of G.G. Allin's "Don't Talk To Me" in 1993. The bands first tours began shortly afterward.
By 1995 the band began recording at Amphetamine Reptile studios for the material that would end up as 1995's "Stuck on Stupid" 10" e.p. on Recess, and split 7"'s with Blanks 77, Resin Scraper, and the Rejects, as well as the song "Sick Pleasure" for Half-Mast/The Daggers Records compilation "No Slow, All Go!" featuring Twin Cities bands. The compilation was nominated for a Minnesota Music Award, as was the Quincy Punx in 1996. Around this time, the band was featured in Debasement Video Fanzine's "When We Play For Real", a documentary film by Patti Rhodes about the Twin Cities punk scene. A lengthy series of tours followed with bands such as F.Y.P., Sex Offenders, and Blanks 77, as well as short stints with Hickey, the Dwarves, Propaghandi, and a hand-full of others.
By 1997, Kyle had left the band and Frank Rivera of Mpls. band Skaterbait, assumed the role of bass player. Frank was featured on the Quincy Punx V.M.L.ive 7" recorded at the Fireside Bowl in Chicago. Frank left the band after the '97 U.S. tour and was replaced by Blake Hurlbert of (sic). In 1997, the band recorded the material for "Nutso Smasho, with Tim Mac, (referred to in the liner notes as "Dr. X") the second full-length L.P. on Recess Records.
From 1993 to '99, various songs were contributed to numerous compilations such as, "Punk Bites 2" C.D., "Pigs Suck" 2x7", "Stealing The Pocket" L.P., Joey Vindictive Presents "That Was Now, This Is Then" C.D., "Punk Sucks" C.D., "One Beer Short Of A Six Pack" 7", on numerous labels including Laberynth, Turkey Baster, Liberation, and V.M.L.
After Blake left the band, Troy Stark (Mondo Trasho, Slipshod) took the role of ninth bassist for the last stage of touring the band would see. By 1999 the band had all but self destructed, and for the last 10 tears, Quincy Punx have played mostly on their own turf no longer touring and only making special "one-off" appearances for one reason or another.

March 4, 2014
OI OI, WANKERS BEWARE. THE PUNX HAVE COME MARCHING IN. GRAB YOUR CIDER AND PISS OFF