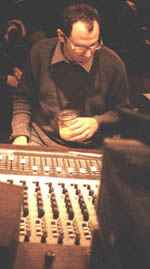 Real Name:
Howard Bilerman
Profile:
Producer, recording and mixing engineer, actor and drummer from Montreal, Quebec, Canada. He started recording in 1993 and is specialized in the punk, indie and avant-experimental scenes.

Between 1996 and 2000 he ran a studio called Mom and Pop Sounds in Montreal, and later started the Hotel2Tango Studio, also in Montreal, with Efrim Menuck and Thierry Amar.