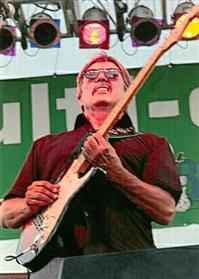 Profile:
US blues rock guitarist. He was just 15 years old when he started to play guitar and was just 19 when he left his small-town hometown of Wichita Falls with a group called Jerry Fisher and the Nightbeats, a rhythm-and-blues band that tramped around Dallas in the mid 1960s. The band’s namesake, DeKalb, Texas, native Jerry Fisher, would later go on to sing lead for Blood, Sweat and Tears. He can be heard on albums by Freddy King and Delbert McClinton, when McClinton partnered with Glen Clark for a time, also played with Huey Lewis and John McFee when they were with the band Clover (McFee went on to become a principal member of the Doobie Brothers and Lewis gained fame with Huey Lewis and the News). He also has played with Jim Hodder, the original drummer from Steely Dan.
Sites:
archive.timesrecordnews.com
In Groups:
Jerry Fisher And The Nightbeats, Kingfish
Variations:
Viewing All | Michael O'Neill (7)
M O'Neill, M. O'Neill, Michael, Mike O'Neil, Mike O'Neill, Mike O'Niell