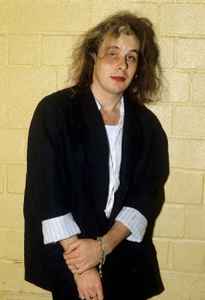 Thompson first collaborated with Robert Smith as a member of the band known as Malice (1976) and later Easy Cure (1977–78). Following Thompson's departure in April 1978, the group was renamed The Cure. The first Cure-related release to feature Thompson was the 1979 Cult Hero single I'm A Cult Hero. Thompson rejoined The Cure in 1984, playing guitar, saxophone and keyboards, and remained a member until 1993. During this period the band's popularity steadily increased, and they released the studio albums The Top (1984), The Head On The Door (1985), Kiss Me Kiss Me Kiss Me (1987), Disintegration (their biggest-selling album) (1989), and Wish (1992).

In 1991 Thompson contributed dulcimer to Shelleyan Orphan's Humroot album, which also featured former Cure drummer Boris Williams. In 1994 he played on No Quarter: Jimmy Page & Robert Plant Unledded, and toured with Page and Plant in 1995–96. He also contributed to Caroline Crawley's project Babacar (2).

Thompson joined The Cure for a third time in 2005, and contributed to the studio album 4:13 Dream (2008). Following his departure in 2011, he legally changed his Christian name to Pearl. Since then he has worked mainly as a visual artist.