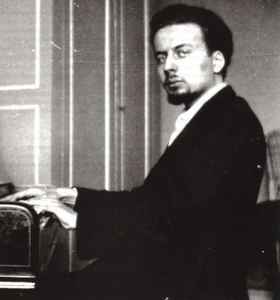 Real Name:
Conte Giacinto Francesco Maria Scelsi d’Ayala Valva
Profile:
Born 8th January 1905 in La Spezia, died 9th August 1988 in Rome, Scelsi was an Italian composer who also wrote surrealist poetry in French. He is best known for writing music based around only one pitch, altered in all manners through microtonal oscillations, harmonic allusions, and changes in timbre and dynamics, but has gone through four different creative periods. His musical output remained largely undiscovered even within contemporary musical circles during most of his life, until a series of concerts in the mid to late 1980s finally premiered many of his pieces to great acclaim. He has then been noted as a visionary of many avantgarde ideas that only later became known through the works of other composers.
Sites:
scelsi.it, Facebook, Wikipedia
Variations:
Viewing All | Giacinto Scelsi
G. Scelsi, Giancinto Scelsi, Jiacinto Scelsi, Scelsi

March 15, 2015
Something about Scelsi communicates him living and breathing INSIDE of every note, every vibration he wrote and played, as if he is looking at us from inside his own music...sublimely conscious music and brilliant artifice...reminds me of the particular genius Italian composers exhibit for tonality, a sense of natural inalienably perfect pitch, with almost every sound giving a feeling of "a cantabile", as if he is SINGING vicariously thru the instrument he is writing for, or should I say THRU.
Reply Notify me 3 Helpful