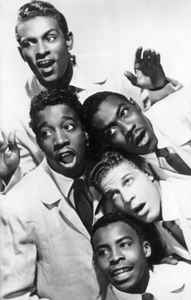 The Five Satins are best known for the doo wop classic "In The Still Of The Night", a song that was popular enough to make the group one of the most famous doo wop outfits, although they never had another hit of the same magnitude.

The origins of the Five Satins lie in the Scarlets, a New Haven, CT, doo wop group led by Fred Parris. The Scarlets formed in 1953, while Parris was still in high school. The group had a local hit with "Dear One" the following year. In 1954, Parris formed the Five Satins with vocalists Al Denby, Ed Martin, and Jim Freeman. Within the next year, Parris had the group record "In The Still Of The Night," a song he had recently written in the basement of a local church. The first single the group released was "In The Still Of The Night". The single was released on Standard Records in the spring of 1956. By the end of the year, it had been leased to Ember and became a huge hit, peaking at number three on the R&B charts and number 25 on the pop charts.
Sites:
Wikipedia, doo-wop.blogg.org, imdb.com
Aliases:
The New Yorkers (6), The Wildwoods (2)
Members:
Albert Denby, Bill Baker (5), Fred Parris, Jessie Murphy (3), Jim Freeman, John Brown (12), Lou Peeples, Nat Mosley, Steve Marinaccio, Sylvester Hopkins
Variations:
Viewing All | The Five Satins
5 Satins, Five Satins, Five Satins (Wildwoods), Fred Parris & The Satins, The 5 Satins, The Satins, ファイブ・サテンズ