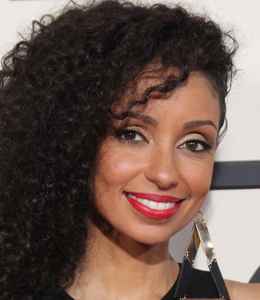 Real Name:
Mýa Marie Harrison
Profile:
Mya (born October 10, 1979, Washington, D.C., USA) is an American Grammy award winning singer, actress and dancer. She is named after acclaimed poet Maya Angelou. Her father Sherman is an African American while her mother Theresa is Italian. Mya had been interested in singing and dancing as a child and began taking jazz, ballet and tap dancing classes from a very early age. During her teenage, her primary interest was in dancing, and she joined a dance troupe called T.W.A. (Tappers With Attitude) in 1992 at the age of 13. She studied under Savion Glover of Dance Theater of Harlem who also chose her for a solo dance performance at the Kennedy Center.

Mya recalls facing peer pressure due to her mixed ethnicity but she rose above it and focused on her career in dance and later music. She became a dancer for Black Entertainment Television’s music videos from 1996 to 1998 and also became a teacher of children’s jazz and hip-hop dance classes in Camp Springs. Around this time, she also began to develop her musical abilities and her father helped her to record a demo, which he took to producers and record companies. He finally landed her a deal with Interscope Records and spent two years recording her debut album, also titled “Mya”. The album featured collaborations with big industry names such as Missy Elliott, Dru Hill, Babyface, Diane Warren and Silkk The Shocker and was a huge hit with tracks like “It’s All About Me”, “Movin’ On”, and “My First Night with You”. It was eventually certified platinum and peaked at No. 29 on the Billboard 200.

Her second album, titled “Fear of Flying”, was released in April 2000. It was also successful, and featured the hit song “Case of the Ex”. This won Mya a Soul Train Music Award nomination for R&B/Soul Album – Female and a UK MOBO nomination for Best Album, selling over 1 million copies in the U.S. and certified platinum by the RIAA. In 2001, she sang two of her biggest hits, both on the soundtracks of successful films. The first was for Walt Disney’s “Atlantis: The Lost Empire” and the next was for Baz Luhrmann’s musical film “Moulin Rouge!” in which she collaborated with Christina Aguilera, Lil' Kim, and P!NK on the remake of the song “Lady Marmalade”. This song reached No. 1 on the Billboard Hot 100 chart for 5 weeks and the four artists performed at the 2001 MTV Movie Awards. They performed again at the 44th Grammy Awards and won a Grammy Award for Best Pop Collaboration with Vocals.

Mya has acted in the Oscar winning musical film Chicago in the song “Cell Block Tango” as well as other films including “In Too Deep”, “Dirty Dancing: Havana Nights”, “Cursed” and “The Penthouse”. She also released two albums exclusively in Japan, titled “Beauty & the Streets” and “K.I.S.S. (Keep It Sexy & Simple)” although she released versions of the albums in the U.S. later. In 2009, Mya participated in season 9 of the reality TV show “Dancing with the Stars” as a dance contestant. She was one of the most popular contestants and finished as a runner up.