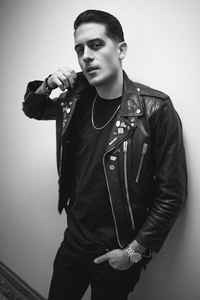 Real Name:
Gerald Earl Gillum
Profile:
Gerald Earl Gillum (born May 24, 1989), known professionally as G-Eazy, is an American rapper and record producer from Oakland, California. His first major-label album, These Things Happen, was released on June 23, 2014. The album peaked at number 3 on the US Billboard 200. His second studio album, When It's Dark Out, was released on December 4, 2015. It featured the single "Me, Myself & I", which reached the top 10 of the US Billboard Hot 100. His third and most recent studio album, The Beautiful & Damned, was released on December 15, 2017.
Sites:
genius.com, Twitter, Facebook, g-eazy.com, Wikipedia
Aliases:
Gerald Gillum
Variations:
Viewing All | G-Eazy
G Easy, G Eazy, G-Easy