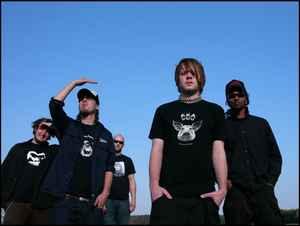 Profile:
Emil Bulls is a German alternative metal band that was formed in 1995 in Munich, Bavaria. The group currently consists of two guitarists, a bass guitar player, a drummer and a vocalist/guitarist.

In 1995, Christoph "Christ" von Freydorf (vocals) and Stefan "Fini" Finauer (drums), pupils of a convent school, founded the band together with Christoph's church choir friend Jamie "Citnoh" Richardson (bass guitar). They were joined by Stephan Karl "Moik" and Franz Wickenhäuser (both guitar). The band was founded in Hohenschäftlarn near Munich. The name Emil Bulls is derived from a children's movie.

In 1996, they recorded their first CD Red Dick’s Potatoe Garden themselves. The CD is in great demand today because of its small circulation. In 1997, they attended the Emergenza festival and finished third in the European competition. For this competition they hired DJ Paul Rzyttka (known as DJ Zamzoe) who afterwards became a permanent member of the band.

After a long tour, their album Monogamy was released by the indie record label Oh My Sweet Records. The record could only be purchased through the internet or during live shows. Monogamy was noticed by Island Records, which offered the band a recording deal. Some of the songs on Monogamy and a few new songs were recorded. The result was Angel Delivery Service, released in 2001. The album was already out of stock a few months later. A new edition was released including a cover version of A-Ha's "Take on Me". The songs "Smells Like Rock'n'Roll", "Leaving You with This" and "Take on Me" were released as singles.

In May 2002, Porcelain was released through Motor Music. "The Coolness of Being Wretched" and "This Day" were released as singles. Between June 2001 and August 2002, the band played 129 live shows including Rock am Ring. In August 2003, drummer Stefan Finauer left the band to go to university. He was replaced by Fabian Fab Füß. In 2003, the band played some shows in Canada and the United States.

On June 20, 2005, The Southern Comfort was released on Pirate Records. It was the last record with DJ Zamzoe.

In February 2007, the live and acoustic album The Life Acoustic was released. The album, which was recorded in Pullach in 2006, was followed by an acoustic tour.

The following album The Black Path was released on April 4, 2008, on Drakkar records. It is the hardest record of the band so far and was recorded in Hannover by Benny Richer (Caliban, Krypteria). The single "The Most Evil Spell" was offered as a free download.

In 2009, Chrissy Schneider left the band and was replaced by Andy Bock, who was the guitar player of From Constant Visions. On September 25, 2009, Phoenix was released. "Here Comes The Fire" was offered as a free download on their website. In September 2009, a music video of "When God Was Sleeping" was released.

The band is currently preparing its latest studio offering Oceanic, to be released on September 30, 2011.

"Smells Like Rock'N'Roll"
"Leaving You With This"
"Take On Me"
"This Day"
"Serenity Now"
"Newborn"
"Friday Night"
"Mongoose"
"The Most Evil Spell"
"Worlds Apart"
"When God Was Sleeping"
"Nothing In This World"
"The Architecs Of My Apocalypse"
"The Jaws Of Oblivion"
"Between The Devil And The Deep Blue Sea"
"The Knight In Shining Armour"
Sites:
emilbulls.de, MySpace, Wikipedia, lyrics.wikia.com, rateyourmusic.com, allmusic.com, spirit-of-metal.com
Members:
Andy Bock, Christoph von Freydorf, Citnoh, Fabian Füss, Graint, Klaus Kössinger, Manuel Lotter, Paul Rzyttka, Stephan Karl